Pondering life's greatest challenges, it's easy to quickly become overwhelmed and feel that nothing one can do will make a difference. But I am privileged to meet and work with individuals who rise above the stifling nature of these thoughts and create products that not only make a small dent in improving the the lives of affected children, but through complete dedication and belief in their mission, make an impact well beyond anyone's wildest dreams! So is the story of Navyn Salem, a stay-at-home mother of four small children, who decided one day to help children suffering from acute malnutrition across the globe. 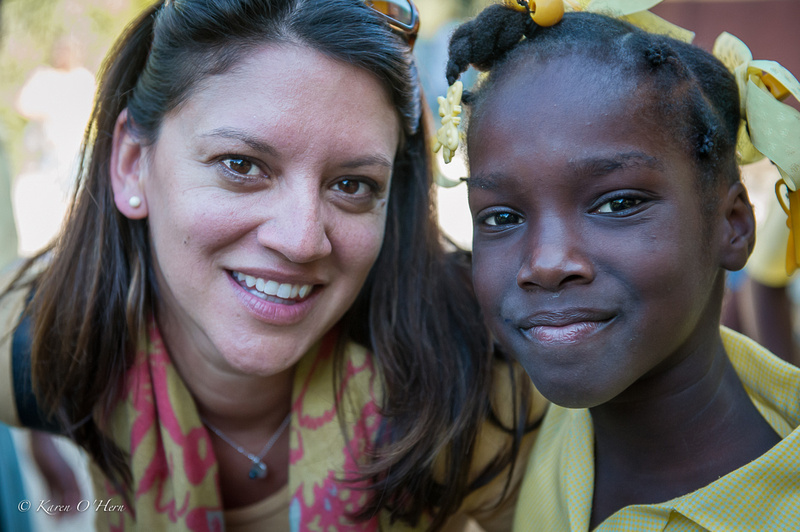 Navyn Salem, Founder and Executive Director with a Haitian student

Without any background in manufacturing, Navyn opened two plants, the first in Tanzania then another in the US, and began producing the Ready-to-Use Therapeutic Food (RUTF) called Plumpy'Nut that has become the standard for treating severe acute malnutrition worldwide. Three short years since the plant's opening in Rhode Island, Edesia Global Nutrition Solutions has delivered product to over 34 countries and reached more than 1 million children thus far. 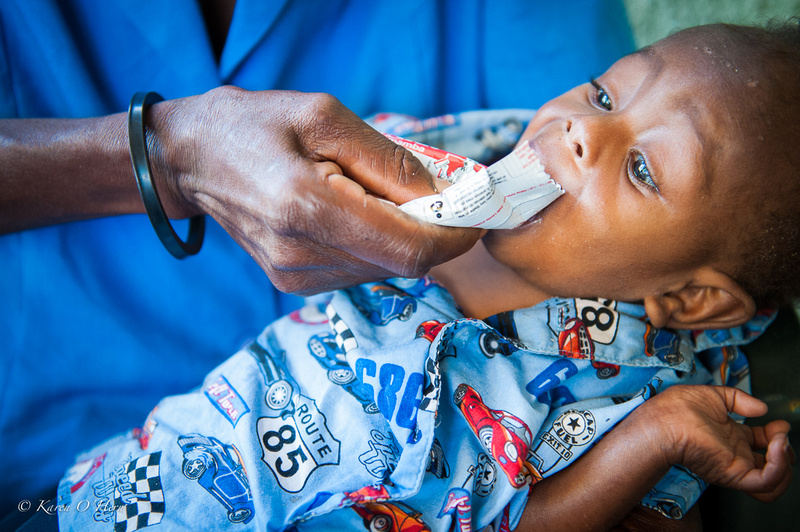 Acutely malnourished infant is fed Plumpy'Nut by his mother. Within 4-6 weeks he will be fully nourished and back on the road to good health.

Is Navyn stepping back and resting on her laurels? No. Instead she replies, "We're proud of that, but we know there's a lot more work to be done."  To that end, Edesia has responded to the Haitian government's request for a solution to the widespread nutritional deficiencies found amongst the majority of its school-aged children by expanding its product line and developing Mamba in 2011. Mamba is a peanut and soy-based paste that is the source of energy, protein, essential fatty acids, and vitamins and minerals for children between the ages of 4 and 10. This nutritional snack is provided to the children in the classroom once a day in order to address their prevalent iron and Vitamin A deficiencies, and chronic anemia.

So I find myself in Cap-Haitian, a city on the northern tip of Haiti, travelling with Navyn, Nicole Henretty, Edesia's Nutrition Research and Policy Advisor, and Navyn's 12-year old twin daughters, to document Edesia's pilot program launched earlier this year to provide a daily nutritional supplement for the school children of Haiti. We're fortunate that the oppressive heat has taken a reprieve and the humidity has tempered its heavy hand for the time being as we spend our first day travelling to a clinic that treats malnourished children in the rural outskirts of the city. 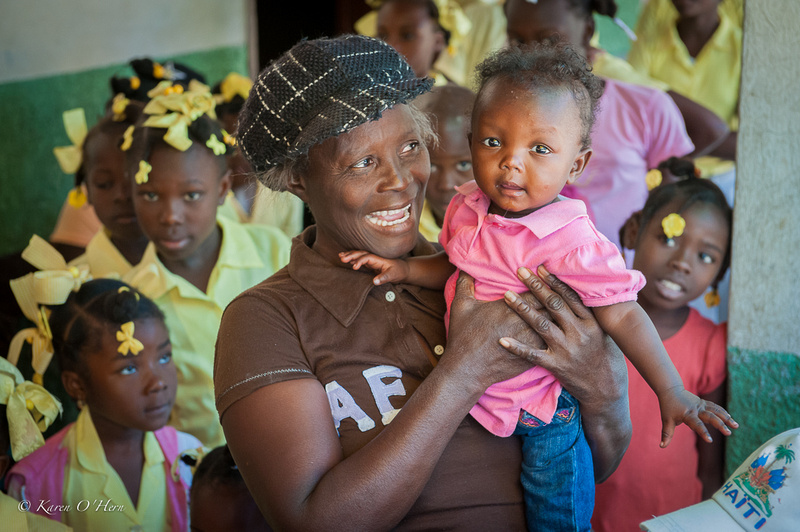 The clinic is bursting at its seams with parents waiting patiently for their supply of Plumpy'Nut for their little ones. 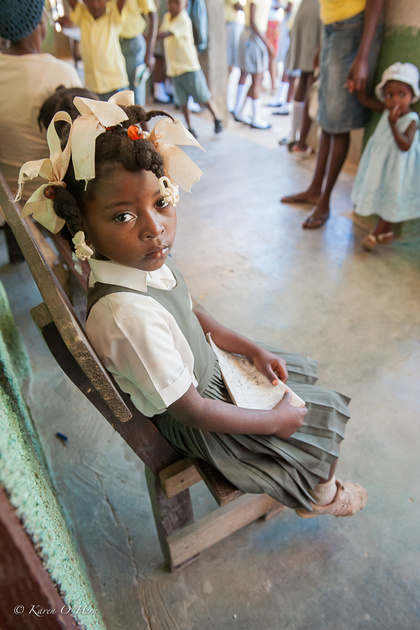 The benches are full and it's standing room only as the porch turns into a make-shift waiting room.

Plumpy'Nut has revolutionized the care of treating severe acute malnutrition. Not only does it alleviate malnutrition in a matter of 4-6 weeks, but it addresses the barriers that were obstacles to the effectiveness of previous treatments -  it requires no water nor refrigeration, two items rarely found in developing countries, and has a long shelf life so the children can remain at home versus being hospitalized. And the kiddos love the taste! It was absolutely magical to see their eyes open as wide as saucers when they saw the packets in their moms' hands, and then eagerly gobble it up with great enthusiasm. 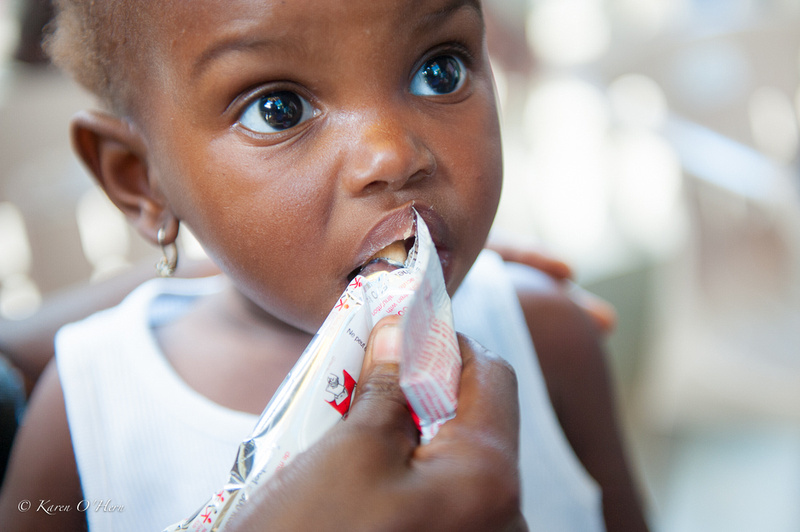 A mom squeezes the peanut paste in this infant's mouth just as fast as she can eat it. 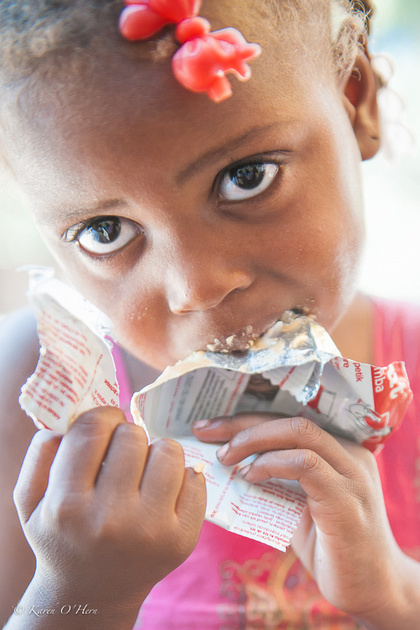 I thought this little one was going to devour the wrapper! 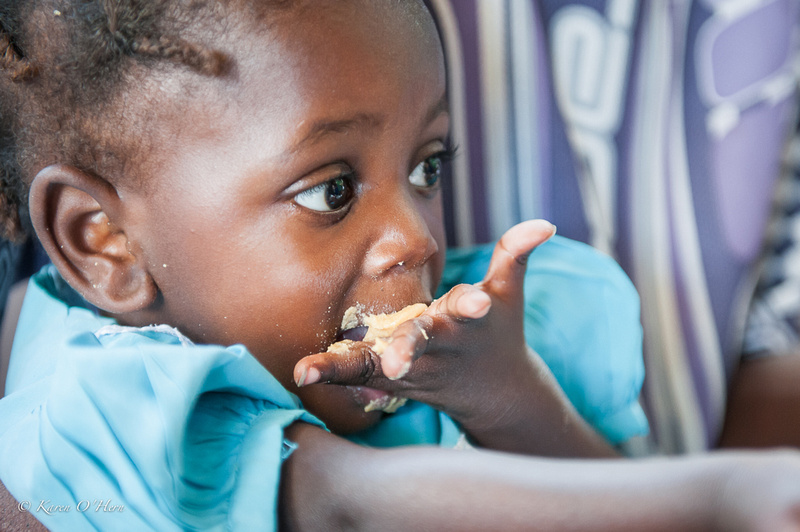 This sweet thing ripped the package and almost got it down in one big gulp!

Not only does the clinic provide the Plumpy'Nut, but the children's growth progress is carefully tracked and monitored by routinely measuring their weight, height and overall nutritional status. 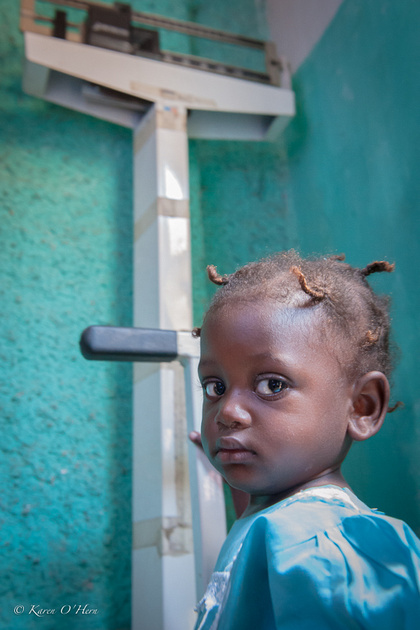 It seems like this youngster thinks eating Plumpy'Nut is a lot more fun than getting weighed. This child still has a ways to go before being properly nourished.

Feeling good about the care in the clinic, we now focus our attention for the next two and a half days visiting the six schools involved in the research pilot program for Mamba.  The schools have many challenges since the devastating earthquake in 2010 hit the southern part of the country that led to a mass migration of families to the north. This girl waits patiently outside for a seat in the classroom.

Most Haitian children come from economically disadvantaged families and eat only one or two meals a day. They often walk long distances to get to and from school, further increasing their needs for nourishment and energy. 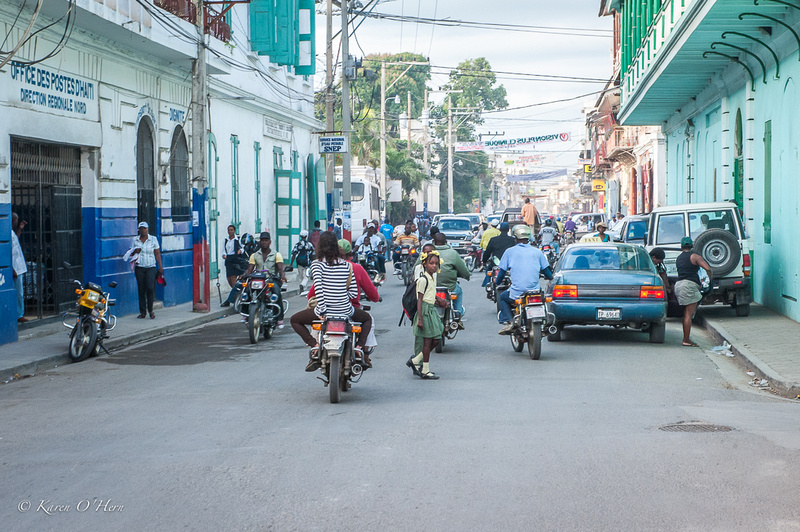 School children in the busy streets of the city on their long walk to school.

Once we arrive, the children eagerly await the time when Mamba is distributed. Just as we have seen in the clinic, the children are excited about the snack and love the taste. Many of them slip a bit in their packs to take home as a treat for later in the day, but the teachers keep an eye out for this and encourage the students to eat it all right then. There's concern that if saved for later, others in the family will eat the snack, thereby preventing the proper nourishment benefits from helping the targeted school children as intended. 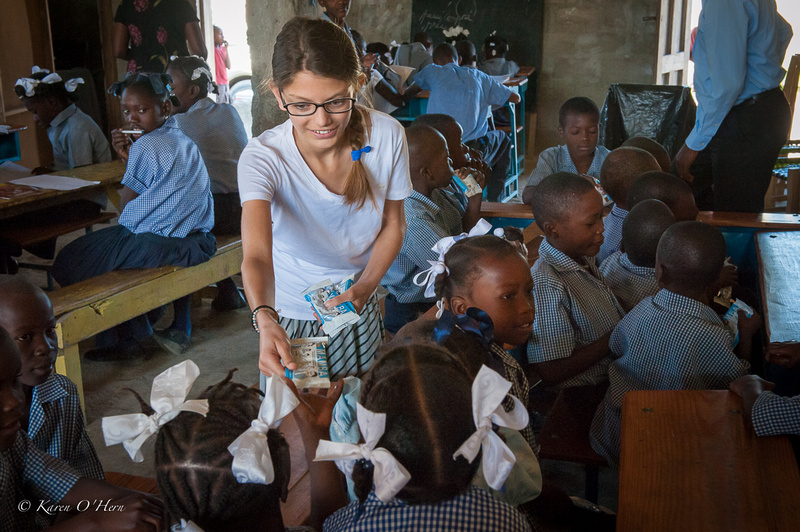 Navyn's daughter helps distribute the Mamba snacks to the students. 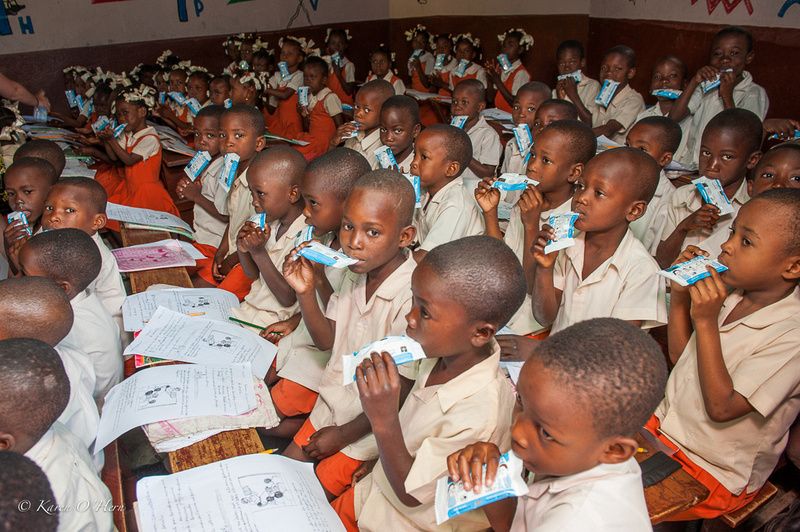 There are a lot of mouths to feed! 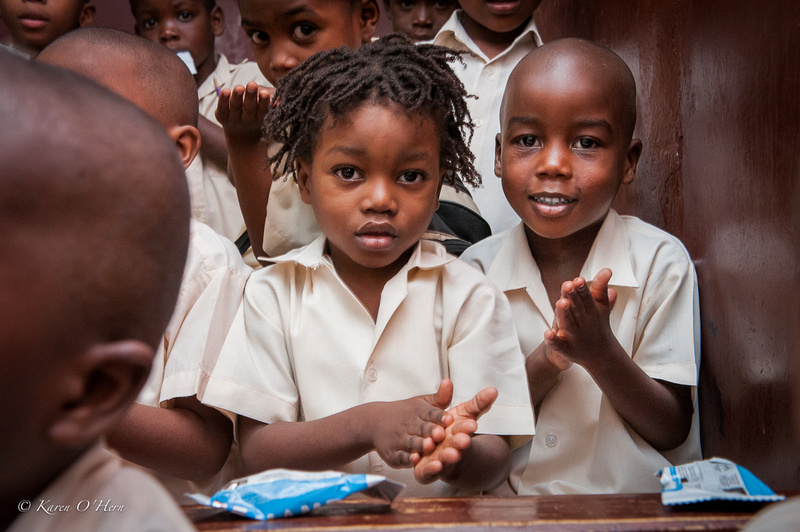 The children are encouraged to wash their hands with antibacterial solution before eating to ward off the diarrhea that so often further robs them of necessary nutrients. 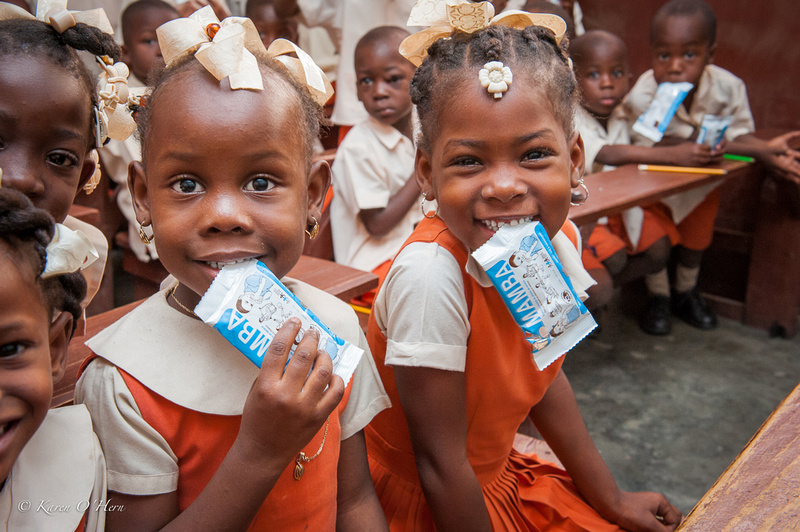 Excited for their Mamba snack

Again, an important part of the study is monitoring each child's progress in height, weight, body fat and hemoglobin. These stats are carefully and systematically tracked throughout the school year to see how Mamba impacts their growth. The results after 9 months will be compared to the stats of those school children in the study who ate an alternative cereal bar and to those that received no snack during the school year. 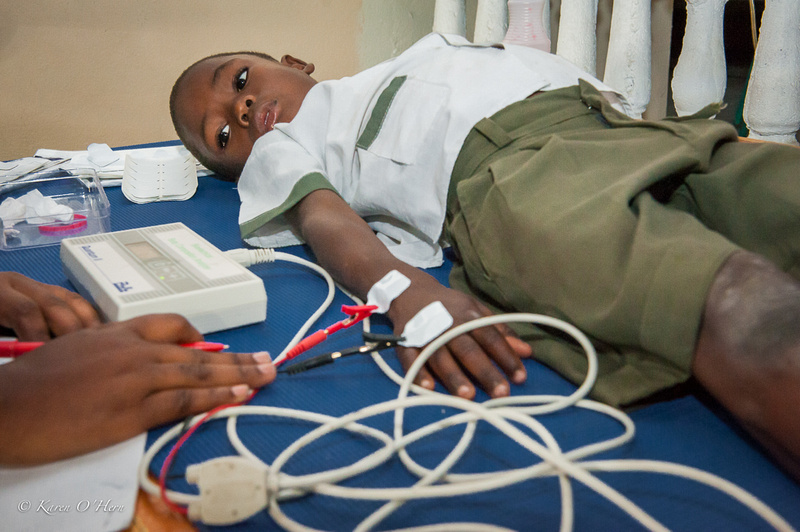 A child's BMI is measured to determine body fat as a percentage of body mass. 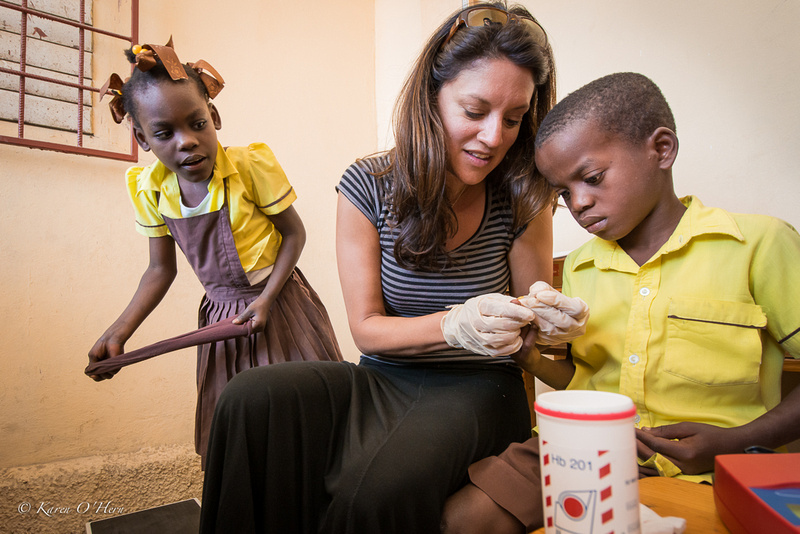 Navyn takes on the not-so-fun job of pricking the child's finger to get blood to test the Hg level.

Our time in Haiti has come to an end and I now fully appreciate that Edesia does more than provide these children a nourishing supplemental snack. By nourishing these children, Edesia gives them a fair shot at a healthy and strong future. And by giving the children a healthy future, they undoubtedly contribute to strengthening the country's future. They have my full admiration.

I'd love to hear your thoughts about this non-profit, Edesia, and the work they are doing. Thank you for participating in this dialogue.

This is a wonderful set of images which tell a beautiful story with an imortant cause and a wonderful person behind. you captured it all so beautifully. I hope you are proud of your work.
Robert Durkin(non-registered)
You have documented what an extraordinary contribution can be made by those who care. Absolutely inspiring. I truly appreciate your sharp focus.
No comments posted.
Loading...
Subscribe
RSS
Recent Posts
Her Name Is Grace Pablove Shutterbugs: "My Heart Burst Wide Open!" Life Saving Drops Behind the Smiles Wishing...to recapture the joys of childhood Who Cares for Jamia? If You Were Given One Wish, What Would It Be? Good Things Come in Small Packages Classroom Champions The World Is Not Without Color
Keywords
Life Threatening Illness Make-A-Wish® Make-A-Wish® Colorado Wish Creative Women Grace Inspirational Business Woman International Kigali Komera Creative
Archive
January February March April May June July August September October November December
© Karen O'Hern Photography
Powered by ZENFOLIO User Agreement
Cancel
Continue