Her Name Is Grace

“There’s someone I want you to meet.” It’s my first afternoon in Kigali and Mussa, my local guide and fellow documentary photographer, hails a couple of scooters and we head to a nearby rural neighborhood. My curiosity has the best of me as we dart in and out of the chaotic city traffic. Making the final part of the journey by foot across the cratered dirt roads, we come upon a small building with a prominent sign out front reading “Komera Creative”. 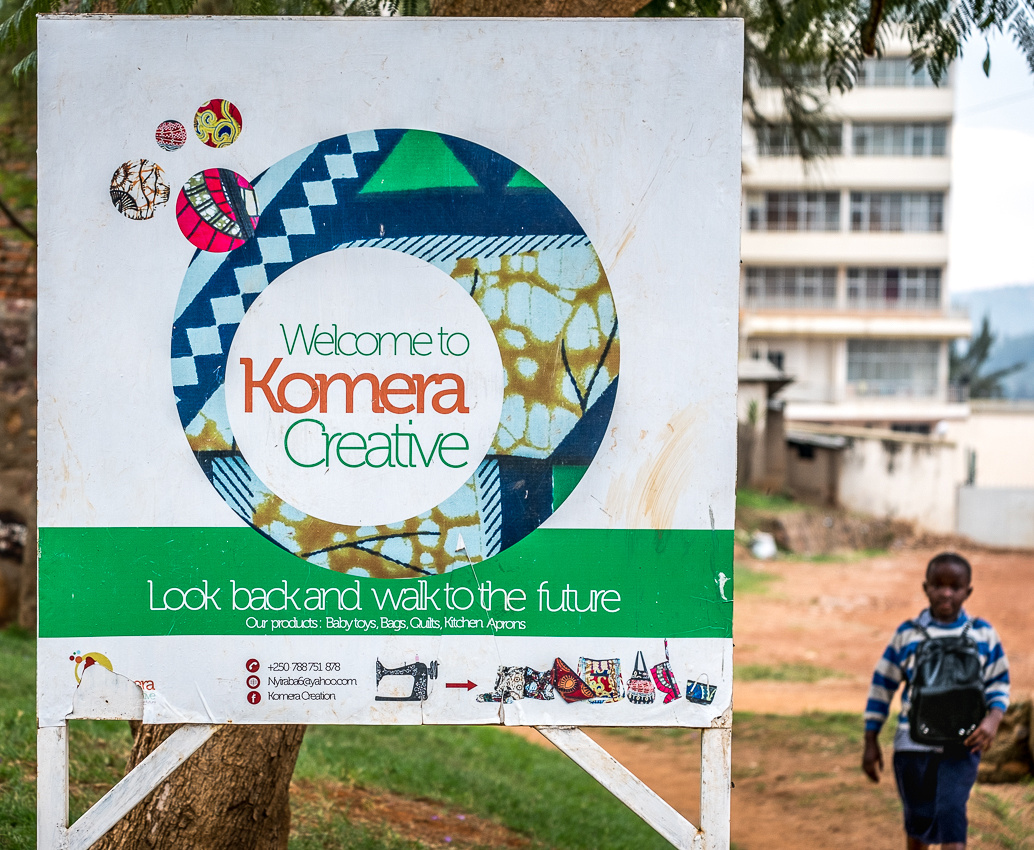 Grace, her neck draped with a measuring tape, welcomes us warmly from the porch with her bright eyes and genuine smile. Framed by colorful goods just inside the door, she quickly pulls me in to her place of business, eager to share her work. 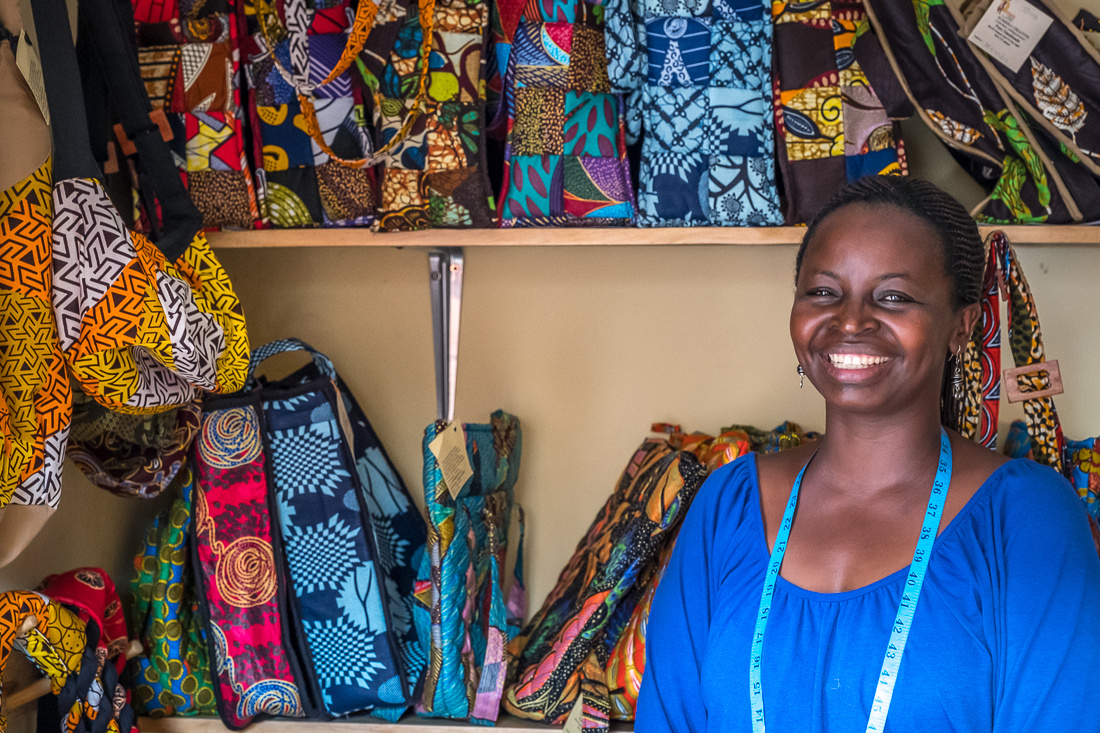 I’m immediately drawn in by the vibrant, beautiful crafts lining the shelves in both rooms – quilts, purses, stuffed toys, men’s neck ties – made from local and Ugandan kitenge patterned cloth. She laughs shyly as I express surprise that she even has IPad covers for sale, saying sweetly, “I need to create what people are looking for”. She begins taking things from the shelves, proudly showing me the quality, beauty, and diversity of the items. 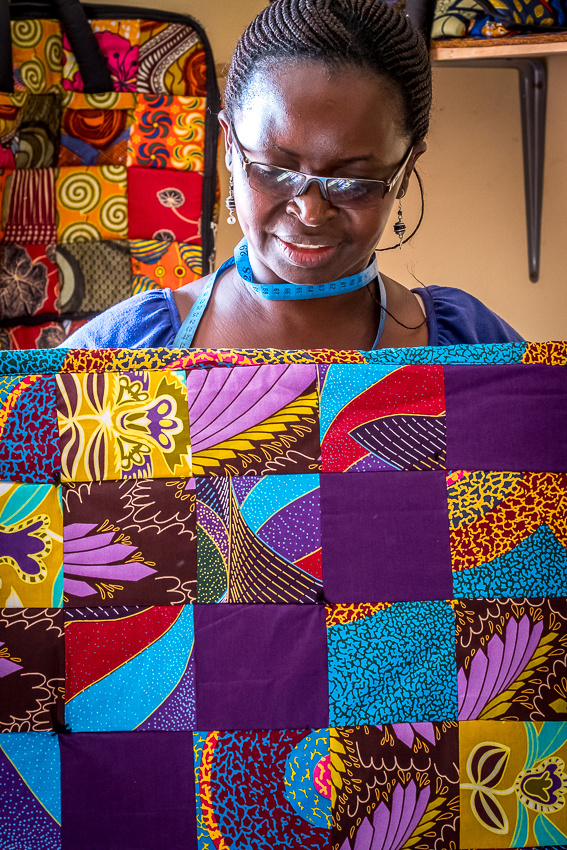 She explains that she teaches newly single women to sew, taking them under her wing for “however long it takes”, starting with simple crafts and advancing to the more complicated items as they master their skills. Grace is providing them income from the first item they sew, paying the women by the piece as they learn - her business model varying greatly from Rwandan cooperatives that are the norm. To be able to sew in these cooperatives, a woman must first be able to afford to attend vocational training, an option not available to uneducated women who are widowed or whose husbands have left them. These women have no means to make a living and, without Komera Creative,  their only option would be to illegally sell fruits and vegetables on the streets in order to survive.

Grace takes me down the short hall to their workroom where a large table dominating the space is covered end-to-end with colorful fabric. 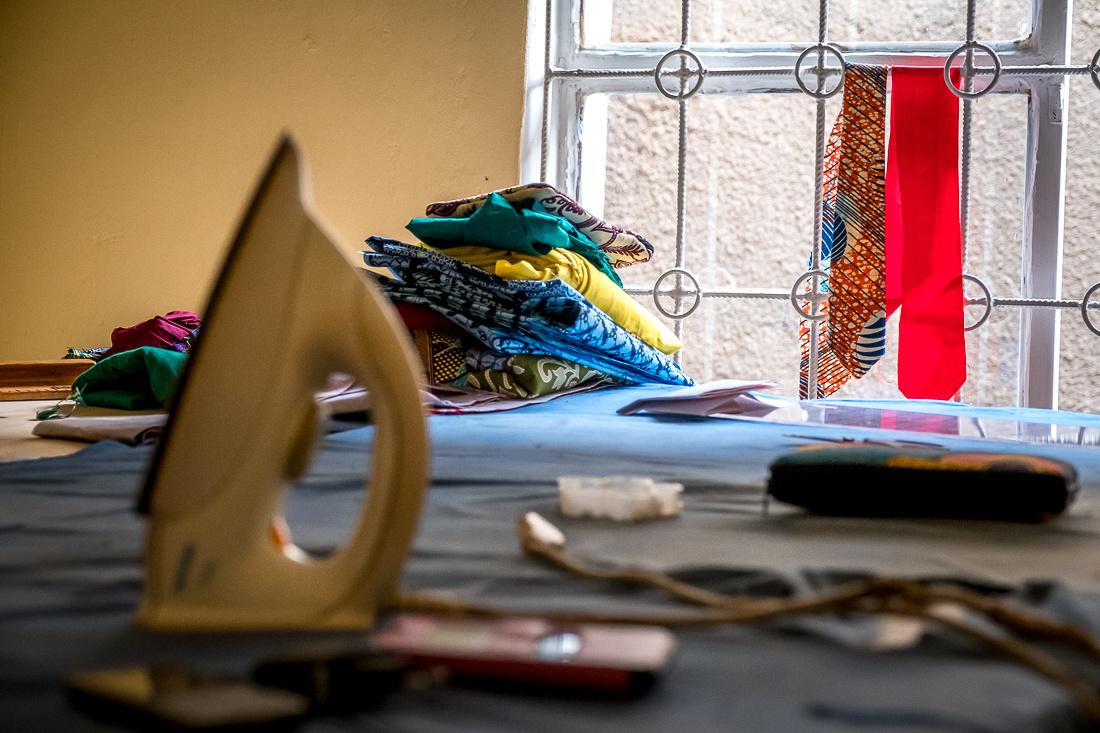 I meet Merabu, a woman who originally taught Grace herself to sew, and has stayed by her side all these years while this entrepreneur dreamed of, and then developed, her business. Merabu acknowledges me with a warm smile, but doesn’t pause, continuing in the rhythm of her work. 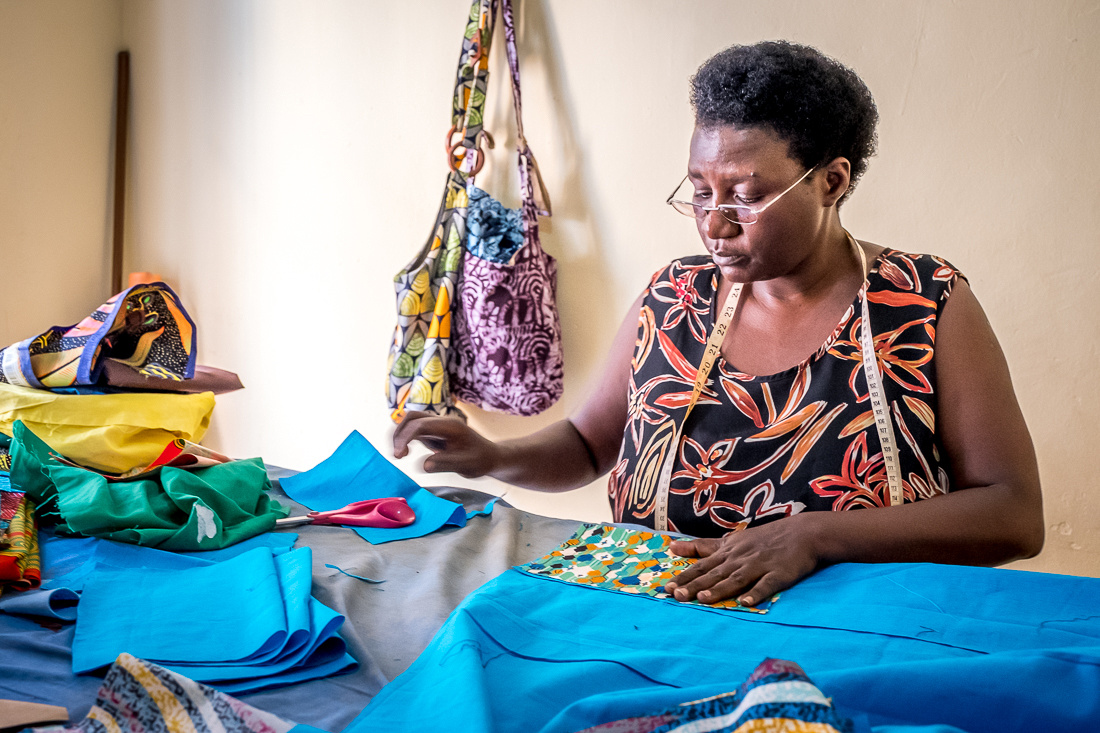 A few steps across the hall and we’re in the sewing room where three of the seven apprentices are hard at work. I meet Janet whose husband left her when she was unable to bear him a child. She has been with Komera Creative for seven months and Grace proudly tells me she’s a fast learner. She's earning an income while she learns, and preparing to launch her own business once she acquires the necessary skills. But just as important, if not more so, she is also healing, thriving on the camaraderie of the others in her situation and, as she puts it, “forgetting her pain as she sews”. 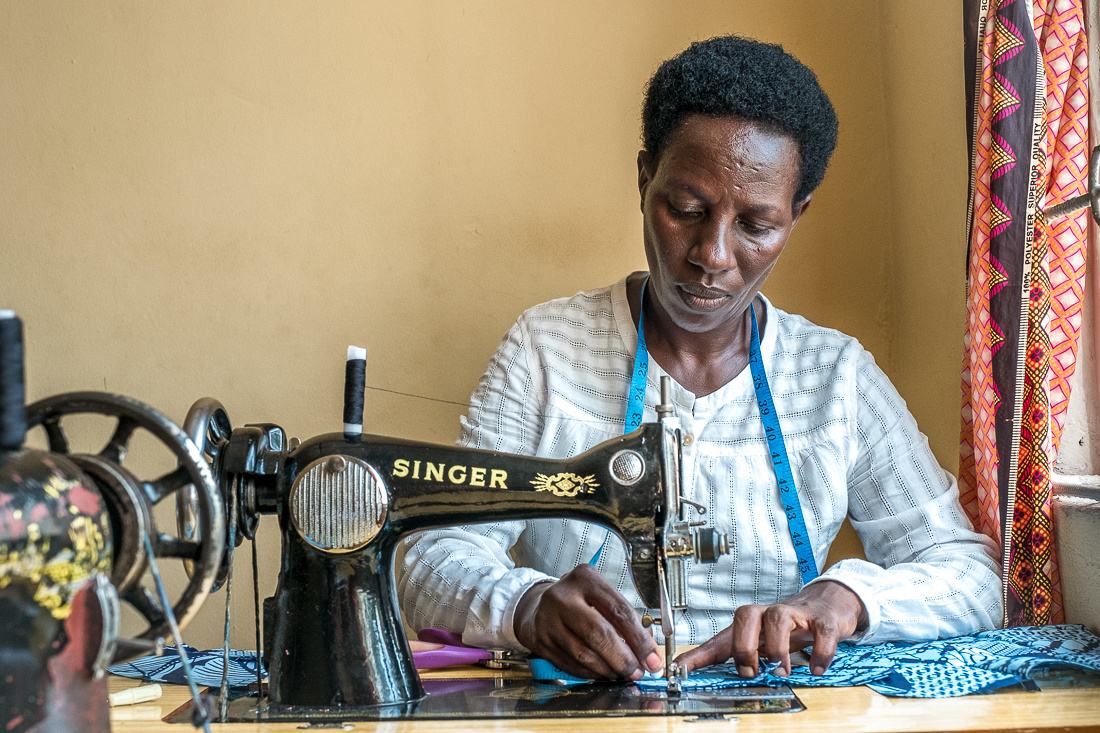 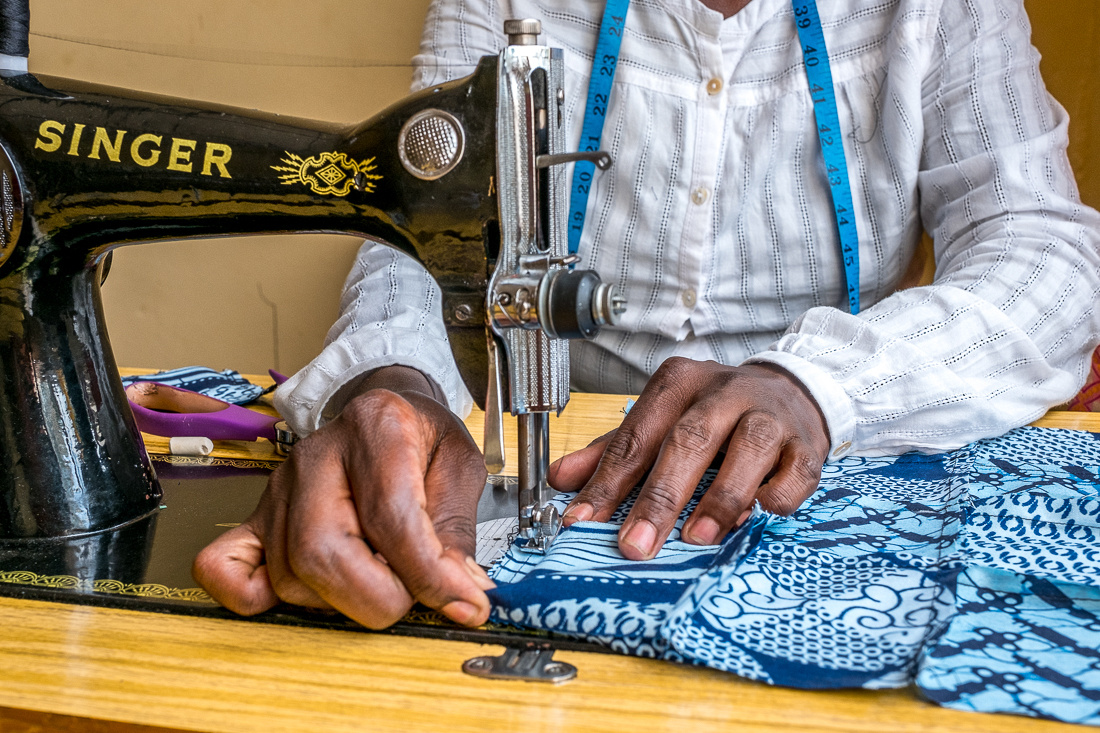 I’m surprised to meet a gentleman apprentice, Vital, a recent refugee from Burundi. Grace explains that while she has never taken in a man before, he came to her with his story and request to apprentice, and she realized that she could also help him lay a successful path to his future. She is not only teaching him to sew, but has opened a room in her business for him to live in the meantime. 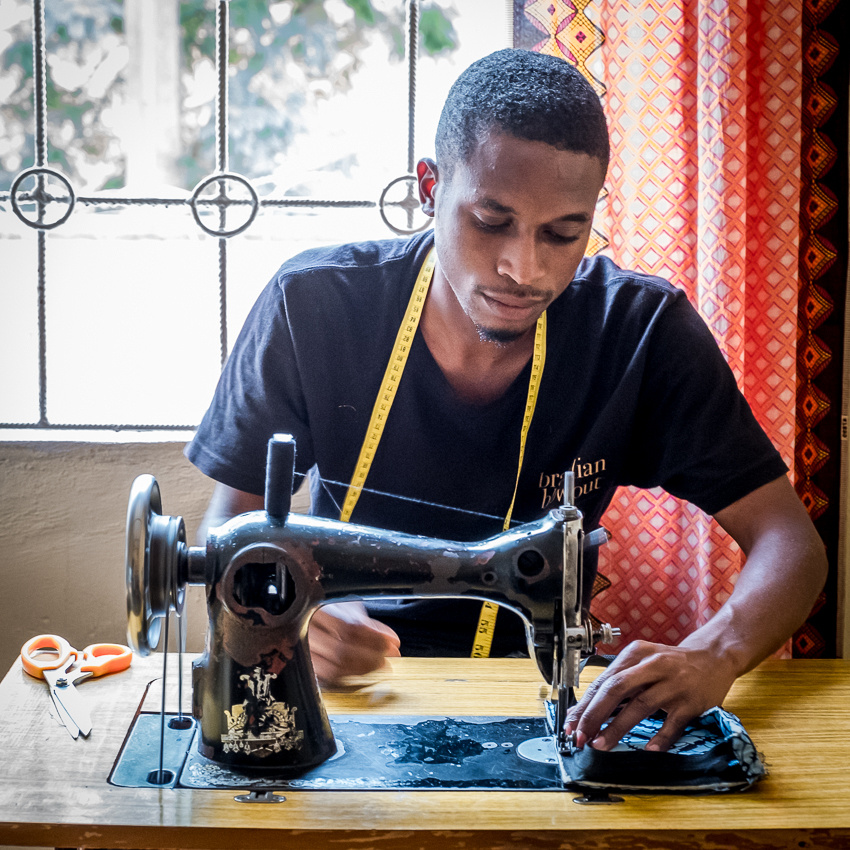 Walking back to the storefront, I naively ask Grace what prompted her to start this business. She calmly tells me of an earlier chapter in her life, one of horror and unspeakable cruelty during the genocide when the neighbors she played with and shared meals with slaughtered her family. As a survivor with only a primary school education, she worked in a Red Cross orphanage, but another tragedy soon struck when her young husband suddenly died. Grace, overcome by grief, fell into a coma. When she recovered, her job was no longer there for her and, as a new widow, she was forced to think of her future. Instead of panicking, she looked out and saw so many women in her situation and felt she was in a good position to help them. 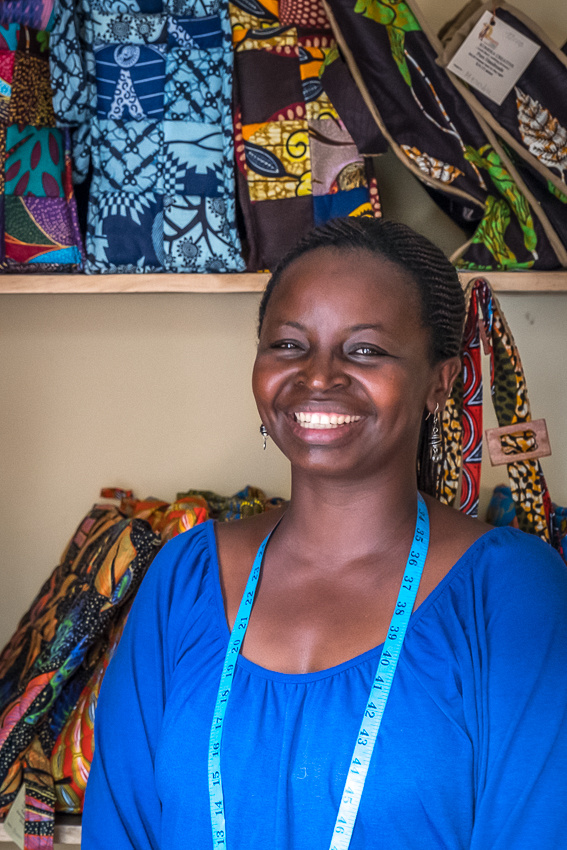 “LEARN. LEAD. BUILD. …Be strong. Yes we can!” was the mantra that propelled her forward. Instead of her life events hardening her heart, they broke it wide-open and helped her better understand the issues of women in need. She thinks back to the men who stepped in and saved her life, and thus Grace chooses to recall her past as “a long story of love that I can now pass on to others”.

Through her business, she has defined and shaped a new perspective of Rwandan women on their way to self-reliance. Grace is an inspiration; not only in business, but more importantly, in life. To me, she represents everything that is beautiful in this world.